We really didn't want to make the playoffs this year.... 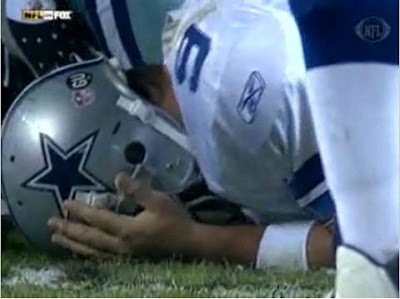 I mean we only signed an unproven QB to a huge contract, gave up a ton of draft pics for a receiver mid season to help out the crybaby receiver we already have, and have to pay a ton in local taxes toward that new stadium. No.....we didn't want playoffs at all. Just because Miami turned it around from winning one game last season to winning division this year means nothing.

Get Whitey In A Bag! 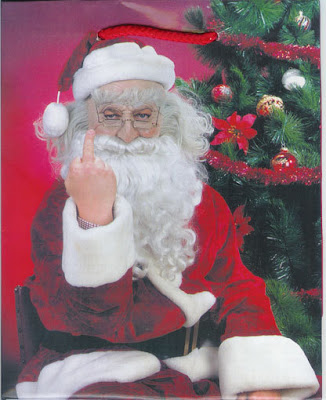 Ok, so after working at Circuit City for a year and a half, and Dell for four years I've made a decision.....I basically hate Christmas now.

Last minute shoppers I think could safely be placed on the bottom of the food chain, and their only purpose in life is to completely piss me off. Somehow their stupidity in life for tryin to buy everything on their list when no stores have shit left, is my fault. Honestly, the crybaby adults that can't handle the reality of us not having anymore Nintendo DS units are worse than their snot nosed bastard kids that have to have them. 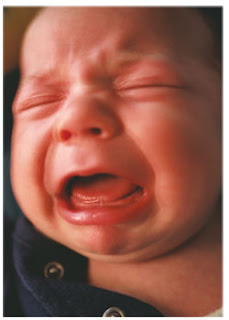 Here's an idea.....stop being a fucking moron and shop in advance. And just because you've driven to every other store in town doesn't mean I can pull that Ipod Touch out of my ass to accommodate you. So no....you won't be getting your bastard child , yes you are a horrible parent now. Your kids will hate you this year. You suck..deal with it.

Despite the bullshit, there have obviously been some positives to the holidays. I'm now rocking a new Ipod Nano. And yes, your kids didn't get one and I did. Ha ha ha....fuck you!

Another upside, I got to see the biggest caucasian afro in my fucking life. And to top it off, it was an old ladies afro so it was the big curl silver kinda shit. The thing was fucking magnificent!! 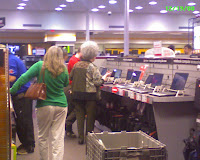 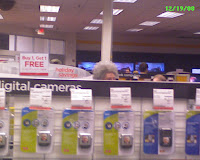 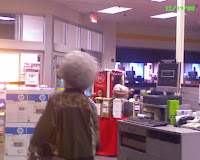 Now this took some real work to sneak these pics. I had to ninja stealth up and down the printer aisle with my camera phone to get them. You come in so handy my little Palm Centro. And yes, I know, it may seem stupid to some to take pics of this poor unsuspecting old lady. But fuck that, this is one HUGE freakin afro. Every member of the Jackson 5 couldn't pull this off.

Ok, so after that I'm thinking this is gonna top off my "WTF happened to you?" hair fix, but not so much. Me and the woman decide to go to Golden Corral a couple of days later for my birthday. Well, I decided we're going to eat there. It's my birthday, so fuck it. Anyways, we're sitting in the car so I can finish off my smoke and there's this freakishly amazing mullett that gets out of a Chevy Avalanche. Let's get one thing clear. A good mullett is one thing in life you have to admire. Well, you actually have to admire the work put into a good mullett, and then also appreciate the huge balls of the person who wears it. Being in Texas, I get more opportunities than most to witness them. And yes, my little Centro is there for the save again. 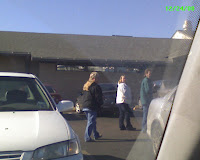 This thing blew my fucking mind. As we got into the car and headed inside, I couldn't help but stare. And her redneck husband with the fucked up comb over haircut and mechanic shirt just added the perfect compliment to this.

So yeah, the idiot shoppers made my holiday kinda shitty, and hell they still are. We've got jackasses coming in even today pissed off cause we don't have shit back in stock yet.

At least now it's almost all over, and I do at least get some satisfaction in ruining their kids holiday dreams.

Looks like the police got some more prostitutes off the streets. Let's check out these hot...OH, GOD, MY EYES. THEY'RE BURNING!! WHAT THE HELL IS THAT? 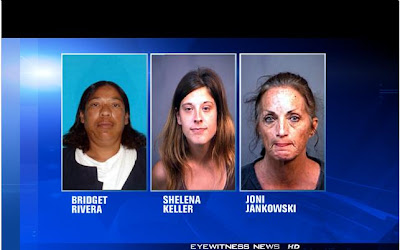 Ok so I just got home from work, and DK was sitting around playing Warcraft and watching some shit on TV. Anyways, whatever show that's on ends, and the original version of Willy Wonka's Chocolate Factory comes on. Not normally what I'd watch, but it's a half-ass amusing movie so I figured I'd watch it while I fuck around online.

Fucking dirty shitballs....this movie is NOTHING like I remember it when I was a kid. So in watching this disturbing story of bullshit, I've learned a few things.

First, poor people are not only dillusional, but completely fucking retarted. You're fucking poor, so fucking deal with it. Don't fill your little bastard child with false hope that he's gonna win some 1 in 1,000,000,000 luckshot and get the riches and spoils that go along with it. It's not going to happen, so don't make him go crying his head off after getting shot back down into reality. Seriously, it's just fucking cruel. 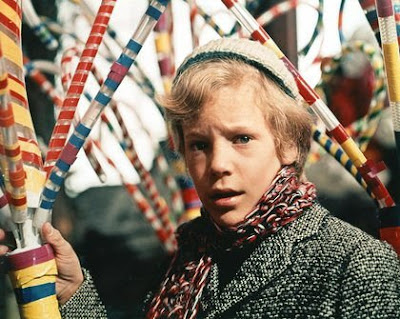 "But I am different. I want it more than anyone."

Boo-fn-hoo. Keep crying you little wuss. Let me enjoy the sweet nectar of your tears as you realized life has just kicked you in the balls. Now go eat your cabbage water dinner. And if you're so damn poor that your 4 grandparents have to share the same bed, why the hell are you wasting money on candy bars? How about regular food, the electric bill, or fixing the holes in your floor. You're poor, you suck.

As for Charlie winning the ticket. I call bullshit on that one. I HAVE to call bullshit on that. He's got his place in life for a reason. You can't fuck up the order of society and ruin my climb to the top. Besides, I have to have someone to serve my fries at the drive-thru.

Next.....why the hell do none of the parents in this movie not discipline their kids??? Not one backhand and a shut your fucking trap!! This is crap! If I had a kid who talked to me like that, I'd jerk his head backwards by the hair and kick him in the spine. Paralysis works wonders when it comes to disciplinary issues.

Finally...this is what has creeped me out the most. This whole candyman thing at the beginning. 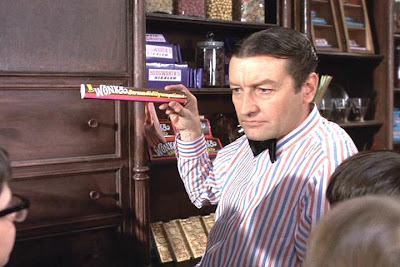 This motherfucker screams pedophile more than anything I've ever seen in my life. And that includes every episode of Barney ever made. Are you fucking serious? Someone actually thought it was a good idea to leave their kids alone with this freak...do you hate your kids?

What amazes me is this guy is actually free. I could safely bet money there's some kind of hidden rape room in that store. I think the dark chocolate candybar on the top is a secret door switch. Try a Wonkascrumpdiddlyumptious.....yeah that's code word you sick bastard.

The "golden ticket" is nothing more than a grandpass to get your kid butt-plugged. Have fun thinking about that mom and dad. 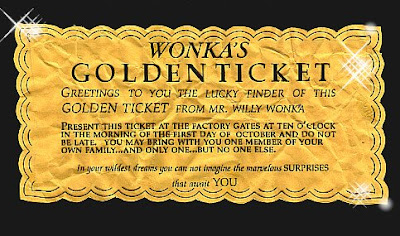 And now for something that makes me happy.....

The new Mac commercials are out! I hate Apple and think Steve Job's is the biggest Fascist ever, but the commercials are funny as shit.
[youtube=http://www.youtube.com/watch?v=DDo28yDdH38&hl=en&fs=1]
Posted by Nicholas White at 12/18/2008 12:33:00 AM No comments:

Email ThisBlogThis!Share to TwitterShare to FacebookShare to Pinterest
Labels: Apple

YAY! We Got Ranked!

Ok so this is really more of a bad thing, but hell I figure if we're gonna fuck something up we might as well do it right and get ranked in some online poll or something.

Anyways....a website called Advertising Age, aka Ad Age (link here), did their "Consumerist's Top 10 Business Debacles Of The Year 2008" column highlighting the worst Business fuck-ups of 2008. Now at first I questioned the validity of us being in this list, seeing as there were so many other options with bank and auto manufacturer bailouts. But then I realized The Consumerist wrote the actual article and it all made sense. Those guys absolutely hate our company, and they would never post anything inaccurate about us. The thought of that is rediculous. I guess it doesn't bleed as bad since we only ranked 8th.

Although it's just one of a bevy of retail failures this year, Circuit City is certainly the most high-profile. Dozens of pundits have tried to pinpoint the moment that Circuit City began its decline. A popular place to start is March 2007, when Circuit City fired more than 3,000 of its most experienced salespeople and replaced them with cheaper labor. In any case, nothing Circuit City has tried since (including offering $1 million "retention" bonuses to executives) has managed to stop the bleeding.

Fuck you guys. Fuck you all in the goat ass. We will turn around, you'll be pissed that we did, and then we'll hire Ethiopian immigrants to eat your babies. 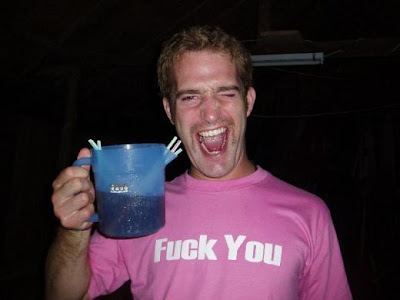 I have just managed to rub my penis raw because of this...... 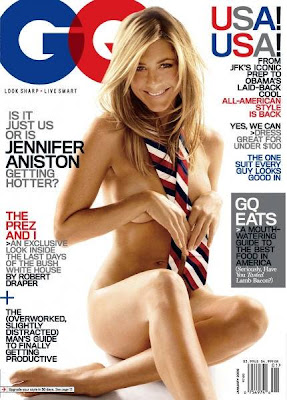 I can now die happy.

Email ThisBlogThis!Share to TwitterShare to FacebookShare to Pinterest
Labels: It Hurts If I Touch It…

...because I had Sonic for dinner and you didn't. Therefore, Santa must think you're a complete crackwhore. Hahahahahahahahahahaha! 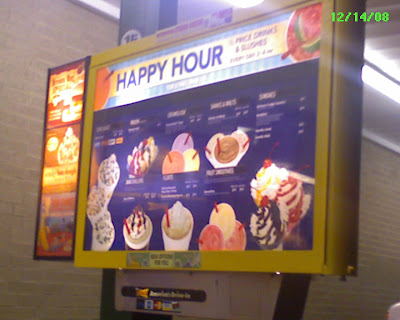 Ok enough of my uberness for now....
Ok so my boy T and his girl split up today, so me and DK had to cheer him up. It's the good thing to do right? Of course. We couldn't have him being all bummed out or anything, so we decided what better to cheer him up than to talk about the hawtness of midgets!? Ok, so more amusing for me personally, but hell it worked. Who can resist this anyways? 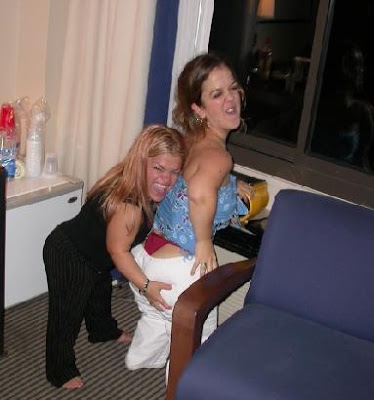