I gotta admit, when I first got this email I was a bit pissed under the thought that Twitter would suspend me.  Me.....the only FN icon on that whole damn site!  It was mainly the fact that the image in the email wouldn't load up on my phone that was the reason I was pissed instead of seeing the obvious error in pretending to be someone else.

After screaming in the Target parking lot "HOW CAN THEY DO THIS TO THE FUCKING KING OF TWITTER?!?!!??!" I then saw the email it came from and thought oh...this is probably bullshit.  At least it's been established with today's Target shoppers who the fuck I am which is also important.

First off, this shit won't come from the admin account for Twitter.  They have dedicated email accounts they use for this shit.  Now don't get me wrong, I've given them PLENTY of reasons to suspend my account.  I talk a lot of shit on a regular basis and piss off a lot of people.  But come on, am I supposed to believe that they would be gracious enough to forgive me and not put in a suspension if I click this link for some awesome offers?  Let's try harder. 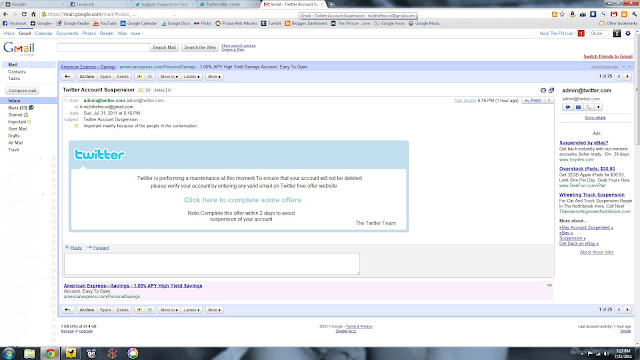