So I kinda cheated and took an extra day off to score up a 3 day weekend.  This is probably the smartest thing I've done in the last...eh.....3 hours or so!  So now I'm at home relaxing, and enjoying the idea that I don't have to go to that shithole tomorrow.

Any major plans for tomorrow?  No, not really.  Sleep in, lounge around, jack off, shower, jack off.....and figure out something productive to do during the course of the day.  Maybe text some co-workers and mock those assholes that I'm home and they're suffering at work.  Fuck them if they can't take a joke.

At least now I get the joy of sitting here eating dinner, and instead of thinking "fuck this I have to go back tomorrow" I can anticipate slacking off all night and sleeping in all fucking day tomorrow.  Vacation time is fucking awesome!

I have come to the realization today that being bored as shit at my job and an Amazon app with 1-click purchasing is fucking dangerous.  This shit gives you no way to stop and CONSIDER YOUR COMPLETE STUPIDITY in buying a bunch stupid shit just because it's cheap.  I don't need any of this shit, but it's fucking there and I have the spare cash.  I have no idea what the fuck I'll do with it, but my brain it commanding me to order it!!!  Now you know how the fuck I ended up with a Buddy Christ bobble head in my living room.  I have no regrets buying this.....it is fucking awesome and you should all be jealous.  I even discussed on the podcast a few weeks ago about this being me loophole to heaven. 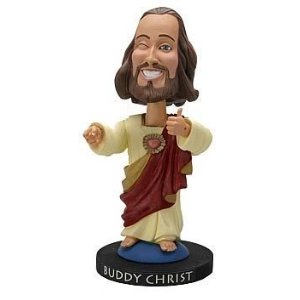 While I'm thinking about it......happy birthday to the little homie Amanda aka @BayDemon.  I havent heard from her all day since her major drinking binge to celebrate (which I might be guilty in encouraging excessin drinking) so I'm assuming she's probably dead by now.

Update: Amanda just popped out of nowhere and replied to a tweet I had about lesbian action, so she's still alive.

Ok so time for me to crash.  I'm tired and twitter died off like fn crazy.  Gotta find trouble to get into tomorrow, and update this shit more.  Lata assholes.