I don't normally have what I'd consider a "shit day".  Sure I have the occasional one off or single crap moment, but generally not a full fucking day.  I guess I should be thankful for that, as it's rare to occur.

First problem, is it's Thursday.  A lot of people are a fan thinking it's almost Friday, it's so close!  Eh...not so much.  Thursday is one big cock tease to Friday.  So close that it gives you a hard on thinking about the weekend, but then you get blue balls realizing that you still have two more days of the week to deal with instead of one.  Sorry to break your happiness and dreams, but it's the damn truth.  It's the calendar's way of saying "you're almost there, but not quite yet you fucking asshole".

So I wake up to this realization and I'm already in a bad mood.  After 30 minutes of arguing with the alarm clock (I really do argue with it), I finally get out of bed.  Clothes decided on to wear, and go to brush my teeth....no fucking water.  What the fuck???  Turn the knobs back and forth, curse it, and slap it a couple of times.  Nothing...dry....not shit.  Check the door and no notice of an outage or repairs.  Walk around outside and no city crew tearing shit up.  We made the payment....my roommate and I have never missed a bill here.  Check the other sinks with the small hope mine died for some unknown reason and NOTHING. 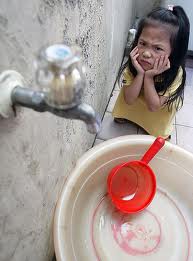 Least I took my shower last night so I could slack off today before work.  Gotta brush my teeth at work, but fuck it, do what I gotta do.

Alright so screw it....move on.  UPS delivery is on schedule for today for the roommate's new phone.  Normally this wouldn't be a concern to me, but we had to deliver it to my parents house because UPS can never manage to read a street name correctly and always leave shit at the neighbors house.  Luckily they seem cool, but it's still a hassle regardless.

So I get to work and think let's just get through with this shit...get it done, go home.   Now last night at work, our entire back section of the building lost network connectivity.  No one knows why yet, so we had the joys of having to sit at other desks.  I got in think that this should be fixed as surely this would take priority?  No, not so much.   We walk in with signs on all the monitors telling us where else to sit.  This should be a petty argument on my part, but I like sitting at my desk.  My chair is perfectly set, the desktop and monitor all set where I like them, and it's my shit there.  I've never been a fan of sitting at some foreign desk with a bunch of shitty decorations all over it, and pics of someone's ugly fucking spouse and ratty ass kids.  Sadly upper management frowns upon me throwing all that shit away so it doesn't have to inconvenience my work vibe. 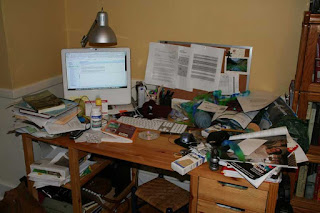 For the life of me, I'll never understand how some of these assclowns can deal with sitting at these ass fucked up desks every day.  Do they have no house training or cleaning skills?  It sucks when I have to sanitize everything before I can even work.  And no, I didn't attempt to identify anything that was stuck to the keyboard.

Time to follow up with Kevin on the water and UPS delivery.  Turns out the water department fucked up our payment for the second month in a row on their website.  Last month they ran the payment twice.  This month, they didn't post the payment at all which is why it got cut off.  Despite this fuck up on their end as we did the payment online, we're still stuck paying a $50 reconnect fee.  Fuck you city of Hewitt, fuck you right up the goat ass.  Fuck it, water is back on by 4pm.  Gotta remember priorities.

Now problem with the UPS delivery.  Shows left on porch, but my mom took it inside then left for work before he got there.  Normally they leave it outside for me since I can't ever find my key to the house.  Great, now I gotta stop by after work and get it so I won't be home immediately.  OK I can deal with this.....it'll give me time to hang with my mom and aunt anyways as I'm not out there much.  Yes I know, don't say it.  I catch enough shit from them.

Carry on through the work day, cursing on and off over having to sit somewhere else......making it through slowly.  I'm then randomly reminded by some chick on the new team I'm on about this pot luck tomorrow.  SHIT!  Forgot about it, which means I'm stopping by the store after work along with my parent's place.  No idea what to bring so I'll just have to wing it.  And yes, I said "some chick".  I don't consider the new team relevant enough to worry about actual names yet.

Night is finally over, errands are done, and I'm in my carport staring at my patio door.  The day is done....I fucking made it!!  Grab the bags from the car and walk up to the door with a smile.  Wait, no, not so simple.  It can't end this easy.....BECAUSE I CAN'T GET IN THE FUCKING DOOR!!!!

Seems Kevin wasn't paying attention and locked the deadbolt on me.  Twist the key back and forth.....nada.  Stare at the lock in an attempt to will the deadbolt to turn...nada.  Yes, I know that's physically impossible to make happen but it's worth a damn shot.  Go around front and that one is locked.  FUCK ME! 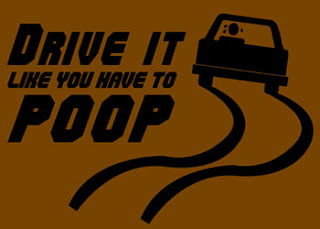 Call the roommate once....twice....five damn times.  Jesus fucking shit this dude sleeps through as much shit as I do.  Luckily I finally got him awake after banging on his window like some stalker teenager trying to get laid.