Nick vs The City of Dallas #TXtweetup

I love going to Dallas.  I also love being drunk off my ass in Dallas.  Some may see it as a cause for concern, but I'm quite content with this situation.  The Texas Tweetup was no exception....

Back in January I had the brilliant idea of having a tweetup here.  The idea was brilliant.  Hit up a lot of people from around the state I'm cool with, get them all in one place, and act like a complete fucking idiot.  It works since most of them are not surprised with my antics.

I apologize in advance that there weren't a ton of pics taken during the weekend.  My ADD kicked in and I was too busy being distracted by a lot of dumb shit.

There's one thing I noticed over the weekend I didn't realize before.....this city has a fucking TON of condom stores!  In a city this big, do you people not have anything else better to do as a hobby than fuck like rabbits???

Random stop to eat at Freebirds by me and Kevin, and I run across a midget!!!  Yes, I have an odd thing for midgets.  I want one as a pet.  I'm completely willing to pay the pet deposit and build a full kennel.  Be jealous, I will have one at some point.

This little bastid in particular was great.  He claims he's a lawyer, and was a total DICK to all the employees.  I gotta find him again one day and party with him.  Can you imagine this guy in action in a courtroom? 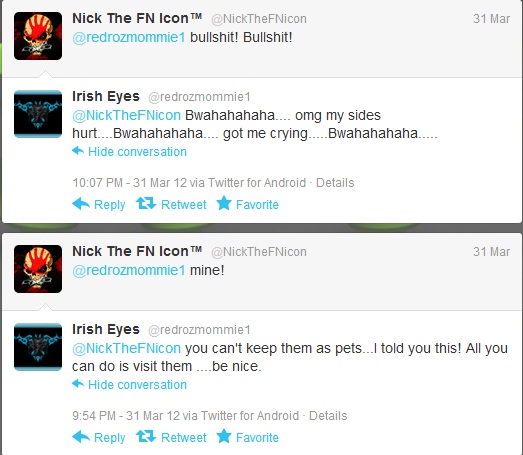 Below is a shot from one of the rooms we had which gave a nice view of the Honda bike shop next to us.

As I was online back in January planning what hotel to pick, there was one feature that was CRITICAL.  I had to have something with a continental breakfast for the free waffles.  They are fucking AWESOME.  It got mentioned once while planning this, and became an absolute requirement.  I'm still amazed that I woke up at 930am to make it downstairs in time for this shit.

Tweetup Fun Fact: Kevin is a champ at locking himself out of his room.  And he'll probably cock punch me for posting this.  We had adjoining rooms that had that door in between them.  Fucking convenient for when we were hanging out and wanted to be lazy.  So we decide to make a run downstairs to smoke.  Go back up, and his room key won't work.  Thinking maybe it's just a bad key (he grabbed the spare they gave instead of the first he used which worked fine) he goes back downstairs to get a working key.  I go in my room to watch TV while this is going on expecting him to be back in my room in a few.  Two commercial breaks later he isn't back so I'm starting to wonder where the fuck he went.  As soon as I get off the elevator I hear him talking to the guest services guy and dude says "I guess your friend didn't care enough to check on ya and make sure you're ok."  My instant response as they turn the corner "nah, that's too much fucking work for this fool."  The guest services guy cracks up.  This dude is cool as shit.

Turns out Kevin locked the deadbolt on his door and didn't realize it when we got back.  The middle door shut behind us, so he got totally locked out of the room when we returned.  Turns out the services guy had to break out some glass security shield like it's some fucking fire alarm he had to pull to get the master keys to unlock the deadbolt.  According to him this is the first time in all the years he's worked there that anyone has ever done that.  I guess that made us famous?  Too bad we didn't get a fucking trophy for it.  The guy just kept laughing.  Fucking asshole...he's still cool though.

And yes, Kevin locked himself out a second time.  He had the key card in his wallet and forgot to grab it when we went down to smoke.  And again, they didn't mind making him ANOTHER card.  Total key cards he had over the weekend I believe was 4.

Just to clarify, fish is fish, and not steak.  This being said, I have never heard of it being cooked like a steak with options like medium-well, medium-rare, etc.  Nor have I ever been asked if I have a preference.  It's a dead fish, you cook it all the damn way through.  This however isn't the case with Dave & Buster's apparently, depending on who you ask.  Annette ordered blackened salmon which on the outside looked fine.  Open taking a few bites and opening the shit up, turns out it was drastically undercooked on the inside.  She tells the waitress, waitress apologizes and said she's never seen that happen before.  Everything is cool and it gets taken back to get corrected.  One of the managers comes out and in a confused manner wants it clarified that Annette DID NOT want it cooked medium rare.  According to him, this is standard cooking style for them on fish.  WHAT....THE.....FUCK?!?!?!?!?!?

I've never been to a fucking place that cooked it like that, or even presented this as an option.  Hell your own employees don't even seem to know this is some protocol.  After some confusion and strange looks from the manager, and numerous reassurances from us on how it needs to be cooked and that he's a jackass, the fish was finally done right.

I don't remember what the fuck the name of this shit I ordered was, but it was fucking good.

So anyways, here's some random pics from the tweetup while we were at our table hanging out, and then in the Midway playing video games while we were drunk.

On a side note, if you're going up there with a party, call way the fuck in advance and reserve seating.  We normally would have done that but we didn't know exactly how many would be there and once you hit a certain number they want deposits and shit.  We basically just said fuck it to that and did a walk in.  Turns out Saturday night was popular for the WHOLE FUCKING CITY because there were four parties of 20 ahead of us, along with a few of 6 and 8 as well.  Are you kidding me?!!?!?!?  We got in at 7pm and got on the list, found some tables to take over and hang out at around the bar.  After a while we said fuck it and ordered our food while hanging out since we were still waiting.  It was something like 10pm when they finally called us.  By that time we were finishing eating.  I was too drunk to care by then and forgot about the list completely.

This dude and his wife we're PIMP!

Ok so she might be right.....I mean they say you're not supposed to use the wall as a brake while driving....

Another side note.  We spent almost 4 hours in the Midway playing games.  There was this one creepy pedobear fucker that was on the Dance Dance Revolution machine and was going nuts on it.  Dude even brought his own damn sweat towel for it.  He was on that fucking DDR machine the majority of the time we were back there, and no telling how long prior.  A fucking grown ass man.

Apparently Annette and Mary were plotting to try and get me and Kevin to do that DDR shit.  There will NEVER be enough alcohol for that to happen. 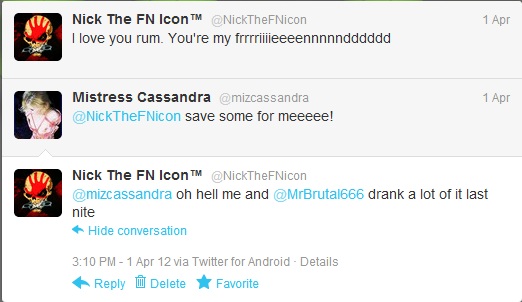 I had to get this pic.  I was talking to Kevin and turned to find a bartender.  Next thing I know, Dan huge a fucking fro growing from his head.

This old guy had some of the most awesome shorts ever.  Even Kevin got a little jealous of them.  Poor guy doesn't know how close he was to being robbed in the middle of a Kroger.

I want to thank this time to thank the awesome hotel staff at the Marriott for not getting mad at drunk me for staggering around their lobby that night.  You guys rock!!  And thanks to Nikki for helping me out on the hotel booking considering I had no clue what the fuck I was doing. 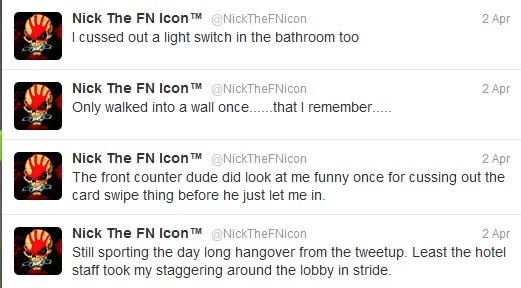 Email ThisBlogThis!Share to TwitterShare to FacebookShare to Pinterest
Labels: #TXtweetup, Android, It Hurts If I Touch It…, The Failed Social Experiment
Newer Posts Older Posts Home
Subscribe to: Posts (Atom)