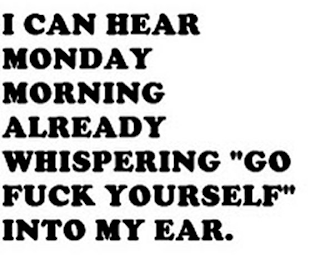 I hate going to work on Mondays.  It seems to have a way of always fucking up a seemingly normal routine in the morning when I get in, and introducing some nice bit of absolute fuckery for me to deal with.  My routine itself is pretty simple...


Today however did not afford me the luxury of a normal start.  Upon coming back from my smoke break and starting breakfast, I'm notified that there's a ton of emails about users having issues in the system.  Fuck.  Fuck.  Fuck you.  Thanks.  Luckily it wasn't quite a ton, but enough to actually make me work and keep my attention from all my other morning amusements.  I did still take time to scratch my balls cause I'm a guy and we do that shit.

Although finally addressed, fixed, and all users notified to proceed, this joyous fuckery to start my day did keep my attention for a good hour or more and has not put a smile on my face.  Apparently my schedule is kind of known as even Brenda was wondering where the fuck I was hiding.

What a fucking start to the day ain't it?  At least now it's calmed down and I'm back to fucking off on Twitter as usual.

At least the weekend was nice and lazy after getting that whole stomach bug last week and losing my voice.  Whoever gave me that shit, you can go fuck yourself and die in a fire.  Painfully and slowly.  And while you're dying in said fire, hear nothing but songs from Pop Evil in the background cause those guys suck horribly.  Let me put it this way....the human body is simply not designed for simultaneous and violent diarrhea and vomiting.  The amount of twisting and torquing on the body simply isn't natural, and hurts like hell.  I know that isn't a nice mental image to have now, but fuck you cause I don't care.  I spent all of Thursday stuck in the bathroom praying for death and it didn't happen.  This was almost as bad as being forced to listen to Pop Evil.  Almost.  And whoever originally had the idea to line up the toilet and bathtub side by side was a fucking genius and probably caught this shit too.

But yes, weekend was good otherwise.  I sat around being lazy, not talking to save what was left of my voice, and playing World of Warcraft basically all weekend.  I play that because I hate people and social interaction so it allows me to hibernate and ignore them, and apparently I also don't want a girlfriend or sex life either.  It all kind of ties together it seems.

On the bright side of all the time playing, I did manage to run enough random heroics to stack up heirloom pieces for a shadow priest I want to level up, and ran some LFR's finally (I've been putting off the raiding stuff for some reason).  Score there!

I'm never getting laid again.  I should have never turned my account back on.  You know what's really fucked up though?  Back in the days with the ex wife (yes this really happened once) I played, and she absolutely HATED it.  I'll admit I spent a good amount of time on there, but still spent time with her.  Most of the time I was on she wasn't even awake since I worked a totally different shift, or I'd play while she was out doing shit.  Anyways, constantly bitched and bitched about it.  I tried a few times to get her to try it and see if there was a mutual interest and she declined each time out of pure hatred for it.  Who the fuck is playing now?   Yeah.  God dammit.  I cuss her out usually once a week for all the shit she gave me for it.

The weekend wasn't all WoW though.  I did manage to get in some college football Saturday when my DirecTV service wasn't cutting out from the fucked up storms we had roll in.  Luckily the Texas game ended well before that shit rolled through so I didn't miss the miracle against Oklahoma (no one gave them a chance to win including me) but it did get stopped on and off for an hour or so during the Boise State game.

And thank you Dallas Cowboys for winning!!  You guys don't look half bad right now, although I'm still in recovery from the epic loss to Denver last week.  I know it's Peyton and all that, but fucking really?  You plays like BEASTS until the very last game.  Fuck you Romo.

There are 3 things in life that are absolutely certain:
It's fucking true.  He does this every time.  He's not a bad QB by any means.  Hell look at his stats.  This ALWAYS happens though.  We already lose enough games due to lack of real talent on the team, but this shit is heartbreaking.  At least we don't suck as bad as the Steelers and Giants this year.